Ted
I run Senior Support Services, a day shelter for homeless seniors. I recently slept on the streets of Denver for one month to protest the Denver Regional Council of Government's (DRCOG) funding cut from $75,000 to zero. This despite the fact that DRCOG only experienced a 13% funding cut, and despite the fact that Congress charged DRCOG to serve those seniors with the greatest need.

The great news is that the Denver Regional Council of Governments (DRCOG) restored our funding -- beginning July 1, 2010 -- in the amount of $73,500 per fiscal year. This is a huge relief as it means we can continue to operate our facility at current spending levels and will not have to cut costs or additional staff.

Thank you for all your support through what has been a trying time for our organization!
Posted by Ted at 8:07 AM No comments:

Friday night in the tent, I dreamt I was returning home. I opened my condo door to reveal completely different furniture. Unsure, I yelled “Hello?” only to awaken a growling dog from behind a couch who attacked me as I quickly retreated out the door.

My actual return was far less exciting but was instead surreal. I woke early Sunday morning but forced myself to go back to sleep as it’s easier to break camp in daylight. I headed to work as I'd forgotten my keys. (I found the only advantage to being homeless was I never had to worry whether I had my keys. Rather, whether I had my key, the one to my office door, the only key I had on me for a month.) As the Denver Marathon was clogging traffic, I stayed at the office a while, then headed home. Walking up my staircase and into my condo for the first time in a month was dreamlike. I wasn’t quite present, and it wasn’t quite possible I had really been sleeping on the streets all this time.

But I was on bedbug patrol so couldn’t tarry. I hopped in my car for the first time in a month, drove over to get my stuff at the office, stuffed it in garbage bags and headed home. I brought the bags of clothing up to my place only as quickly as I could throw them into a hot washer, spending the balance of the day doing laundry and watching football. I quarantined the coats and camping gear as they are difficult or impossible to wash, and threw my sleeping bag in the freezer for a few days. It may be the real culprit, and I assume the freezing will also kill the eggs. We are on the warpath at work to eradicate bedbugs from our building but it’s a constant battle.

Monday morning, I got up and went to my closet and nearly put on one of the two pairs of pants I’d been wearing for a month. Then I realized I could wear something else and practically had to force myself to do so.

When I first decided to render myself homeless, I figured I should look the part in order to experience what it was like to be homeless. Whether or not people truly thought I was homeless I can’t say but I felt they thought I was homeless and I didn’t like it. So I shaved my beard on Sunday, and at my first opportunity on Monday, I got a haircut. I could not put it behind me quickly enough, like a bad dream.

Homelessness comes in various forms. It is not just those who are sleeping outside. It is those staying with a friend, those sleeping in their cars, those in any kind of temporary housing, and even those in motels. Each will have a unique experience but I believe there are commonalities.

Being homeless is extremely inconvenient. As most can’t easily carry all their belongings wherever they go, they must take advantage of the few places that offer free storage (like our organization), or pay to store their things. Yes, some homeless people pay for storage, often in the hope they will soon have a home. When they head out for the night, they take as little as possible but must make sure to take what they need. It requires logistics, at which over time, they become skilled.

As showering required this kind of effort and of course opportunity, I would shower only every third day, always on the trajectory between work and the campsite, at my mom’s or a friend’s house. There were few times when I veered from this trajectory and rarely liked it when I did. Friends only gradually came to realize that even the thought of going out of the way wore on me.

Being homeless is stressful. If you are sleeping outside, you tend to want to return to the same place each night. As it’s on public property, you can never be sure that it will be available, that you won’t get kicked out, run off, or worse in the middle of the night by the police, drunks, or hoods. Getting in and out of my favorite campsite -- which was on Cherry Creek where Clayton Street intersects -- also meant that I lived in fear of the equivalent of Paul Blart. I am not making this up, the mall cops were the enemy. I wouldn’t arrive until after 10pm when things were a bit quieter and when they weren’t as vigilant or omnipresent. After crossing under University Blvd each night, I would turn off the lights on my bike. If they were around, I would peddle past my campsite entrance and turn around only when they had moved on to the parking garage. I really didn't want them catching me descending to my campsite as I feared being hassled and wanted to be able to return every night. I didn’t want anyone even seeing me, for that matter, and suspecting me homeless.

Being in any public place with a backpack and appearing like you might be homeless makes you feel like people have branded you homeless. It is an uncomfortable feeling, like walking around with a Scarlet H on your chest. (I've thought it would be great to have uniforms with big H’s on them to demonstrate solidarity with the homeless. The problem is that many of our part-time employees are former clients so we frequently have employees who are homeless.)

It is not just stressful for the homeless, but for friends and family as well. As many of our homeless are alienated from their families, it might be tempting to dismiss this fact but that would be an oversimplification. It would be safer to say that if you are a close relative of a chronically homeless person who you are no longer able to help for whatever reason, it is a deep wound you necessarily try to ignore.

I was astounded and touched by the level of concern for me while I was out there. It was at times almost burdensome. People would urgently tell me what I should be doing regarding our battle with DRCOG or what I should be looking out for when on the streets, etc. Laundry lists of tasks would issue forth as if I had an army at my disposal. But at the root was genuine concern and a need to get me off the street. My gut tells me this is one of the reasons why many of our clients lose touch with their families as this level of concern puts enormous strain on relationships, eventually tearing them apart. It was certainly one of the reasons I returned home.

Being homeless is exhausting. Only on rare occasions in the last month have I really been able to relax. It is difficult to get a truly sound night’s sleep, and the stress involved adds to the exhaustion.

Being homeless gives you a feeling of being lost, of being wayward and without purpose or place. I was lucky I still had a job, a place where I was valued, a place where I belonged and where I even fit in as a homeless person. This disconcerting feeling, being without a compass, can only be compounded in someone who is both homeless and unemployed.
Posted by Ted at 2:45 PM No comments: 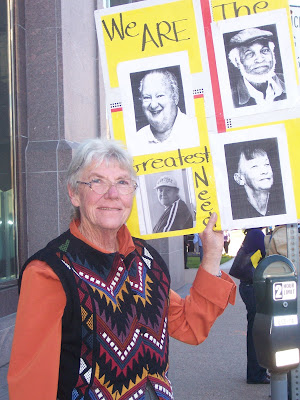 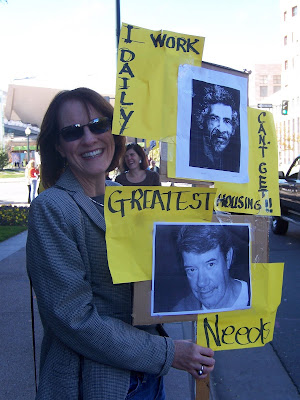 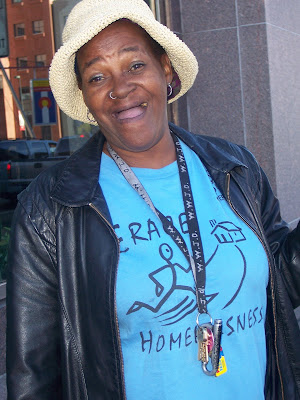 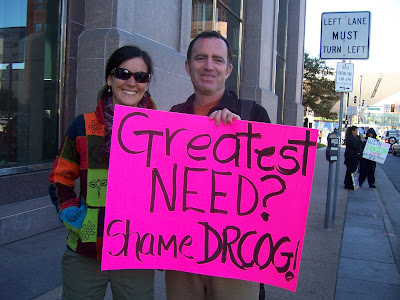 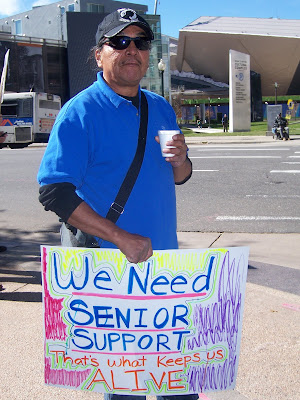 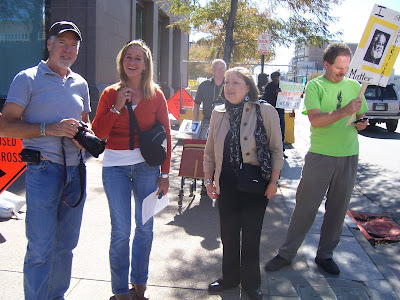 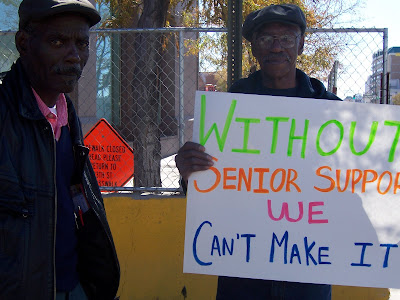 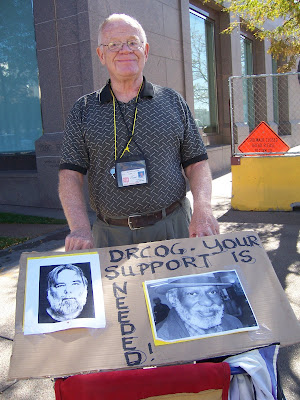 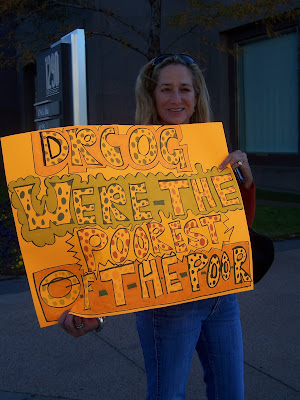 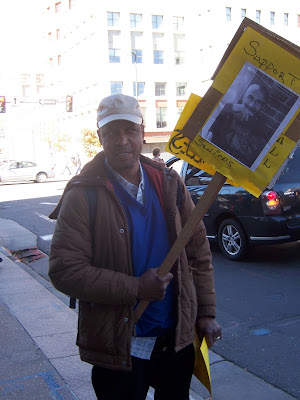 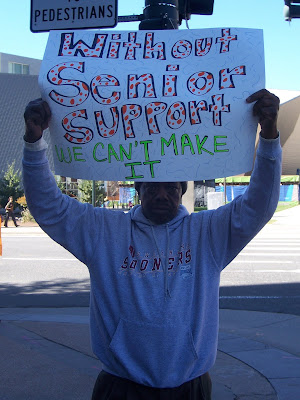 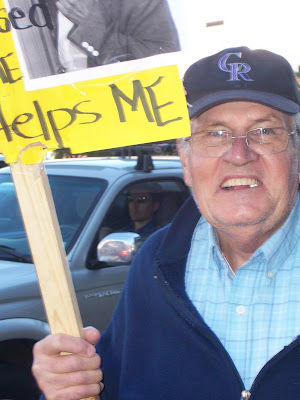 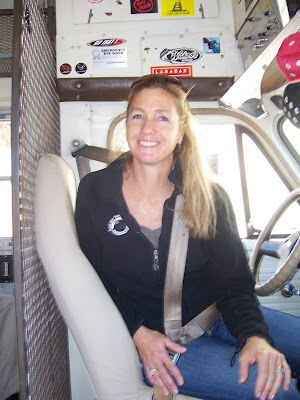 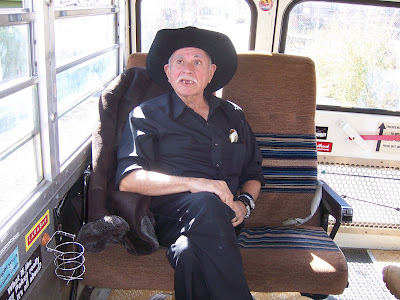 Above are a number of pictures from our successful, 60-person strong protest today calling on DRCOG to restore funding for homeless seniors.
Posted by Ted at 3:46 PM No comments: 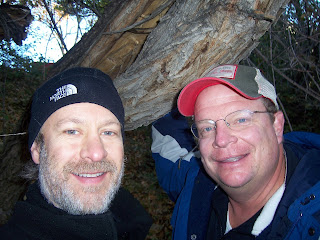 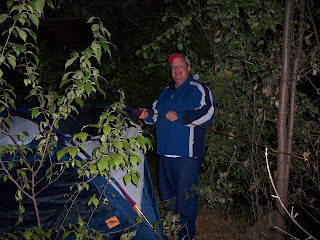 Dave (at right) is putting up the tent last night. He urban-camps with me every Thursday, starting with my first night of homelessness a month ago when we were awakened and soaked by sprinklers at 5:30am. (That ended any sleeping in parks.) It has continued each week, frequently on the worst weather night of the week. One Thursday a couple weeks ago, we were both very cold but last night was relatively mild.
Posted by Ted at 3:10 PM No comments: 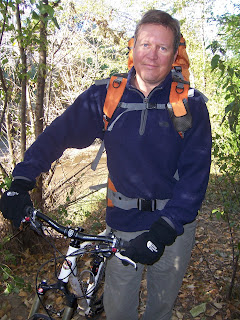 The night was very pleasant and uneventful. No beaver or other critters, as far as we know. Greg and I urban-camped and Ann Marie, his girlfriend, brought us coffee this morning. Despite the bedbug threat, they kindly fed me and allowed me to use their shower last night.

I just found a bedbug on my hand but he wasn't full of blood. Small comfort. 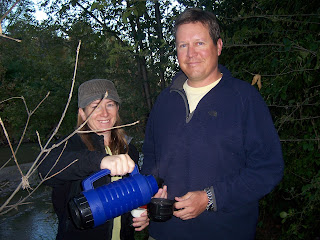